It seemed very easy. In the eyes of the one who has not played, the task is so mundane. Your first try would probably be a score of zero. Sheer luck if you get a hand of the game only with a few tries. You would probably spend a few minutes at first. Eventually those minutes would be hours. Then you would see yourself playing this game on every possible free time that you have. The worst case scenario of a flappy bird addiction would be neglecting necessary duties just to tap on you smart phone to beat a previous high score. It happens everywhere. People are wasting precious time to do something they have nothing to gain from (except bragging rights  from a high score which someone else in the world had already beaten). 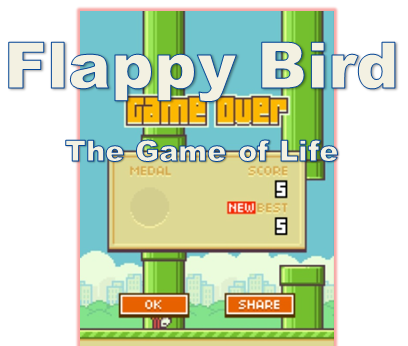 However, seeing it in a different light, the flappy bird phenomenon has revealed a human nature so fascinating, perhaps if put into right use could benefit us greatly. Consider the number of people currently addicted to the game; the same percentage shows how many people are determined and obsessive. Either coined as an obsession, addiction or passion, the human drive is overwhelming. It does not matter if they had failed a thousand times. They would get back in the game as quickly as possible. It does not matter if they spend precious time. They would be willing to sacrifice such treasure they would not be able to get back just to beat their previous score. Some would even forget to eat, take a bath or even work. Their passion or obsession would be the center of everything else.

What if that same drive is being used by every individual to achieve their best in each mundane task that they have to do such as working or studying? If every employee has the same passion for their jobs just as they have on the Flappy bird game, every company would keep prospering. If every student has the same obsession for gaining more knowledge just as they have on beating a high score, our next generation would be smart enough to save Earth and solve global crisis.

In reality, the same tactics you use to complete a good game in flappy bird could be used to achieve your own goals in life.

First, you need to recognize that the task is really not easy. Whatever, ambition you have in life, there is really no easy way to it. When you lay out a particular plan, everything seemed so smooth, until the time that you start putting it to action. It is just like how you first laughed at the mediocrity of the Flappy Bird game, until you started playing it.

Secondly, hindrances are unpredictable. The pipes that make your silly bird fall off do not follow any pattern. In life, no matter how much you plan, unexpected problems would always occur. But just like the opening between two pipes, there is always a solution to any difficulties. For the next part, focus is important. A single distraction would make your bird crashing down. The bad news is, distractions are everywhere. They are unavoidable. The good news is, you could train yourself to focus and ignore it.

[pullquote]Sometimes, the most common things in life teach us valuable lessons we always tend to miss[/pullquote]

Sometimes, the most common things in life teach us valuable lessons we always tend to miss. And probably the best lesson that we could pick up from this famous game is, we ultimately compete with ourselves. As long as we keep playing, we always have the chance to better our previous record. In life, as long as we keep trying, we could always improve. The possibilities of our lives and achieving our dreams are infinite. If you could spend such time, dedication and persistence to fly that bird out of the pipes, why not also use it to fulfill your dreams? Enjoy the game of life!