Department of Science and Technology (DOST) finally revealed that Philippines will soon launch two micro-satellites of its own. Diwata, is the first Philippine micro-satellite to be hopefully launched in 2016 followed by another not yet unnamed micro-satellite as announced by DOST on March 10, 2015.

This three-year project aims to improve disaster management, weather forecasting, forest protection and other public services. Undersecretary Rowena Cristina Guevara of Department of Budget and Management shared that it is expected to cost P840.82 million ($19 million), and DOST had already made way to fund the project until 2017.

The money needed for its realization will not be solely paid by the Philippines, P515.92 million ($11.6 million) of the total amount is agreed to be shouldered by Tohoku University and Hokkaido University. 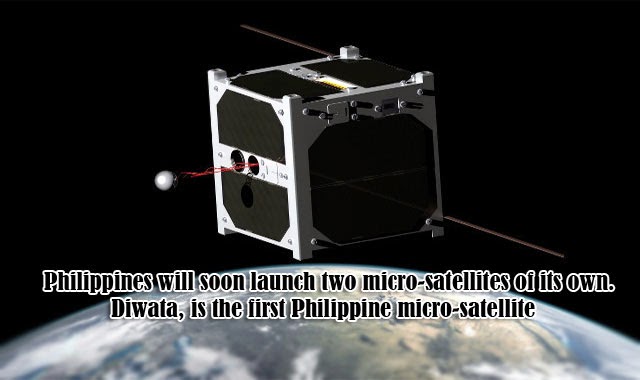 The two Japanese universities are currently training Filipino engineers and scientists to build and design not only the micro- satellite itself but also the receiving stations. Given with a government scholarship program, the Filipino scientist had been training in Japan since October last year. They are focusing on developing satellites as part of their masters degree in the Japanese universities that are known for their rich experience in satellite programs.

Tohoku and Hokkaido universities were responsible for developing Rising-2, Japan’s own micro-satellites. Tho two universities are expected to help the trainees in making the project possible.

The project was named Philippine Scientific Earth Observation Micro-Satellite (PHL-Microsat) Program is headed by Dr Joel Marciano. Marciano shared that that the micro satellites are expected to help in weather forecasting, disaster management programs, agriculture, forest protection, fisheries, mining, and the protection of historical and cultural sites. Diwata ( PHL-Microsat-1) is expected to be launched in 2016 through International Space Station (ISS), followed by PHL-Microsat-2 in 2017.

From the satellites, the data will be received by a ground station Philippine Earth Data Resources Observation (Pedro) Center which will be located in Subic Freeport in Zambales. The images from the satellites will be processed and spread by PEDRO to the concerning government agencies to be used for public service in the country. PEDRO’s data will also be directly accessed by University of the Philippines Diliman for the development of the said program.