Late Tuesday at a mall in Quezon City, the police were sent in to deal with irate shoppers who reacted wildly after a smartphone company situated in the mall suddenly closed its ‘super sale’ promo hours even if it has yet to reach its scheduled end.

Bargain hunters of a fair amount of number had flocked a ZTE kiosk in SM North EDSA. Most of them specifically went for the ‘limited offer’ and refused to leave after the managers of the store had announced that the certain branch already ran out of units that are for sale. 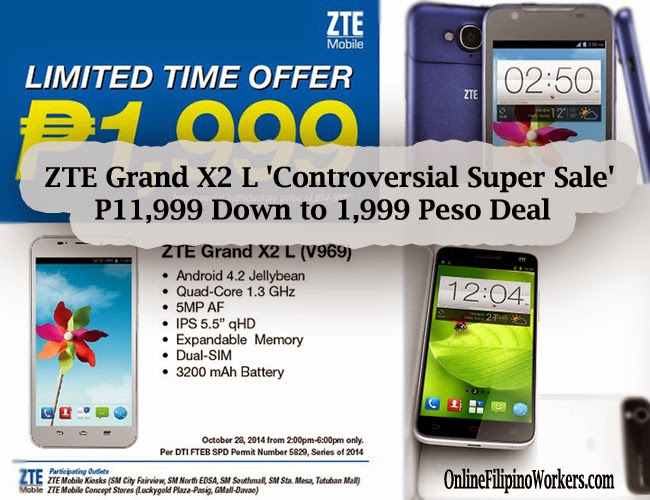 The company, as reported, claimed and clarified that the outlet only has 100 units of the brand’s Grand X2 L smartphone for each outlet that participated in the sale which were part of the said promo.

From the initial suggested retail price of P11, 999, The Grand X2 L was being offered to willing buyers for as low as P1, 999 only as part of the bargain deal.

The “crazy” sale as it was dubbed and reported by several online websites including search engine Yahoo, had nothing to say about the smartphone’s limited quantities. However, it was noted that the sale will only last for four hours, from 2 p.m. to 6 p.m.

On Tuesday night, more or less 200 individuals gathered around the ZTE kiosk and voiced out their complaints and frustrations towards the company.

The kiosk had to be barricaded with steel bars and the managers began to offer freebies to somehow lessen the crowd’s growing tension. The same situation also occurred to a ZTE kiosk at SM City Sta. Mesa.

To prevent the chaos from getting any bigger, members of the Quezon City Police Department arrived at the scene to aid the store managers.

A total of seven participating outlets for the sale had been listed by ZTE and had made stalls and kiosks at the these malls: SM City Fairview, SM Southmall, SM North EDSA, SM Sta. Mesa, Luckygold Plaza-Pasig, Tutuban Mall and GMall-Davao.